Another conference has come to a close. Life, the Universe, and Everything was held last Thursday through Saturday, and I had the pleasure of attending all three days. (Thanks for the two days of vacation, day job!) 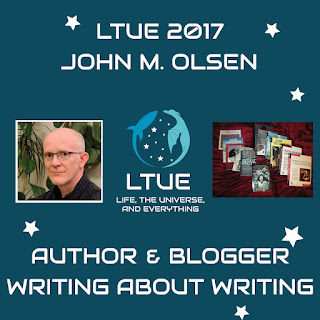 I had the wonderful opportunity to help as a panelist to talk about hacking late on Thursday. We covered good examples and bad examples of hacking in media, whether it be books or movies. Some get it close, while others sacrifice any sense of reality in order to get the right sense of tension. Technical people get annoyed if they're picky, but solving a password one character at a time gives a (hideously fake) visual sense of time constraints.

And never put two people on one keyboard to better fight against a hacker. Keyboards don't work that way.

One odd thing happened with the Apocalypse Utah anthology I mentioned in my last post. The publisher ordered copies the same day I did, but theirs came from the east coast instead of the west coast like mine. I got my books almost a full week before the conference, but the publisher's copies (including a copy for each author) didn't arrive until the Friday of the conference.

That wouldn't be so bad except that we had our release party Thursday night. The only copies of the book in the whole building were the ones I had ordered. I brought them along with me to the release party and had them available for purchase. We lined up all the authors in attendance to sign them. Luckily I had enough for all those who wanted to buy a copy at the event.

We also had some authors read their stories. Due to tight time limits, I had to skim over the middle of my story a bit, but it was a lot of fun. My story has a strong Twilight Zone vibe.

Friday morning I realized in the rush of the evening I never got a copy signed for myself at the party, so I tracked everyone down through the day Friday to get their signatures in my personal copy. It now sits on my shelf with the other anthologies containing my stories.

Saturday night we shut down the booth in the vendor room at closing time, so I packed up my books and headed out with the first load to the car. I tossed boxes into the trunk and figured it was warm enough I didn't need my coat, a 2002 Winter Olympics black leather jacket with lots of insulation I didn't need. Into the trunk with it.

The wife and I finished packing and took the rest of the load out to the car. I reached for the keys. Yup. In the coat pocket. Inside the trunk. With the banquet starting in about ten minutes.

The Mariott Hotel folks stepped up in a big way. They called around, but the local police who have tools to do that sort of car unlock were not on duty. I could call a tow truck and spend $20-50, but we decided to try our niece who lives with us to see if she could bring a spare key. She was at a movie but would call when she got home.

She called, found the key, and was on her way as we finished dinner. The tension level dropped all the way to DEFCON 5. The entertainment was great, with M. Todd Gallowglas telling stories, and Larry Correia talking about his fondness for the LTUE symposium and the authors, artists, and volunteers who make it great. It's not out on video yet, but you can probably search for Larry's talk if you want to hear Larry talk about Dave Butler's sandwiches.

Long story short, my niece drove 45 minutes to deliver the spare key, and she was able to meet an old family friend who had hung around after the conference to talk to people.

All's well that ends well, and the conference ended well.

You can find my pictures from the conference here on facebook. I got a shot of just about every panel I went to.
Posted by John M Olsen at 10:26 AM No comments:

The "Apocalypse Utah" anthology was announced by the Utah Horror Writers Association in early 2016, with submissions due on October 31st (of course). I have a story in the previous year's anthology "It Came From the Great Salt Lake" so I figured I'd give it a shot. Here's last year's effort:

Then I wondered what sort of apocalypse to write about. I got most of a draft done about a supernatural tornado tied to an actual tornado that hit downtown Salt Lake City on August 11, 1999. I tossed it because the story was broken beyond repair. My hopes of getting a story done a few months early went down the drain.

I thought about it off and on. Should I submit? What would I write? A couple of months before the deadline, I came up with an idea. Less horror, more Twilight Zone. A scientific experiment on thought acceleration in Research Park near the University of Utah gone horribly wrong. Being a software engineer and naturally analytical gearhead, the story was a great fit for me.

I wrote it, then bounced it off some friends who gave me feedback to polish it up. I ran through my "search and destroy" list of mistakes I make when writing, such as using too much passive voice. I fixed a few things and gave it a bit more polish. I even got it turned in a few days early, on October 25th.

On November 29th, I got the acceptance email from Griffin Publishers, the company used to publish the anthology. Woot! Great rejoicing!

Then came the edits. Callie Stoker beat my story into the ground for me, and we had a couple of rounds of edits that brought it into focus. It can be discouraging to have someone point out the weaknesses in your story, but Callie knows her stuff. We banged things back and forth until I understood her concerns, and she understood where I wanted things to go. In the end, more of the story made it from my head to the paper. A good editor can make all the difference. Don't expect to agree on everything with your editor, but pay attention and find the reason behind everything they send you.

At this point, announcements started to pour out. There was the cover release, showing off Carter Reid's work. He did the cover for "It Came From the Great Salt Lake" as well. If (WHEN!) you get a copy of either book (BOTH!) and have a chance to meet Carter, ask him to sign it for you. You won't regret it. Cover pictures flooded Facebook, and several of the authors reposted and liked them in a social media frenzy.

Then came the proofs. I read through the proof and found a couple problems that had sneaked in with the final edits. Luckily, there was time for feedback to get some small things fixed. The funny part is that I had worked out the timing of events down to the second in my story, and that's where some of the details failed to match up. Always read your galley proofs.

Since I hang out at local symposiums and conventions like Salt Lake Comic Con, LTUE, and Winterfaire selling books, I ordered a box. They arrived in time for this week's release at LTUE. The smell of fresh books wafted out as I opened the box. If you don't know that smell, visit more bookstores.

If you get a chance to stop by, join us in Provo this Thursday evening for the official release party! It will be a lot of fun. If you can't get there, look me up at a Utah con, or hit Amazon through the pictures above to get your hands on a copy. And as always, post a review to say what you liked most about the anthology.
Posted by John M Olsen at 9:30 AM No comments: