Last year, I attended only Saturday at the Salt City Steamfest. This year my wife and I were able to be there for both days. 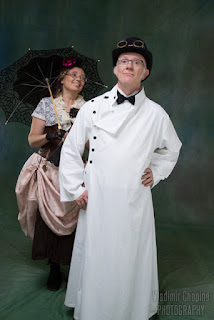 We had Victor Chopine take some pictures, which was lots of fun. He has a great eye for poses. 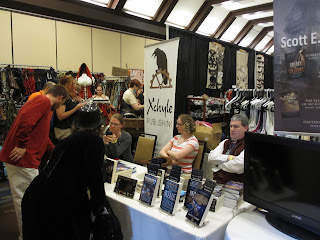 I helped out a bit at a booth full of authors associated with Xchyler Publishing. That's Candace Thomas, Sarah E. Seeley, and Jay Barnson pictured, and we had Scott Taylor and Scott Tarbet there as well.

We even had this cool online poster put together.

I also attended quite a few panels, mostly on writing, pitching your writing (to editors and agents, not into the trash), and storytelling in general. Our friend Julie Barnson told ghost stories, which are her specialty.

One of the panels consisted of these three ladies ( Terra Luft, Christauna Rose Asay and Callie Tolman Stoker), which was great fun. 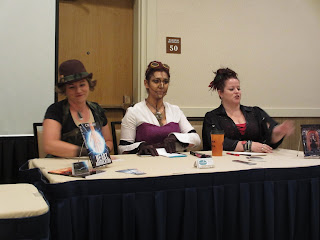 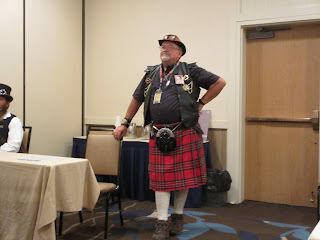 There was a writing contest hosted by Curiosity Quills Press, where James Wymore was supposed to announce the winner at the conference. Unfortunately, James had a schedule conflict and had Jason King fill in for him. Due to unforeseen complications, the announcement was moved around and rescheduled, so a troop of us were constantly asking Jason if he knew when we would hear about the contest. He was constantly apologizing for delays that were not his fault, and bore up well under our constant barrage. Finally, the announcement was made!

But the best part of the contest was yet to come. The gal who won had just been in a round table discussion with me and a few other people a few minutes before. Several of us held our own impromptu session talking about how to approach publishers. The speaker had been a no-show, so everyone just shared what they knew about both short story and novel submissions and publishing methods. When I saw her next she was sort of bouncing and floating down the hall, bordering on giddy because she had just received the good news.

That's when Terra, Christauna and Callie started to talk to her. (You know, I should find out her name,but haven't yet.) They invited her to dinner. I'm not sure how many of the three had been beaten by her in this contest, but I heard one of them had been in 2nd place. They were all nearly as excited for her as she was for herself.

The contest winner is second from the right. This picture is from Terra Luft's Facebook page. The struggling new author was taken under the wing of this fine group of writers. It was great to see her adopted into the community, where even those whom she beat out in the contest were not just happy for her, but went out of their way to be inclusive.

I've felt this same thing in how I have been adopted into the Utah writer's scene. I know several local authors now because of conferences and events over the past year, especially after being included in a Xchyler anthology. Some of them even remember my name. :) I really appreciate my new friends, and their willingness to share, support, and help others.
Posted by John M Olsen at 11:51 PM No comments:

Servant of the Crown give-away 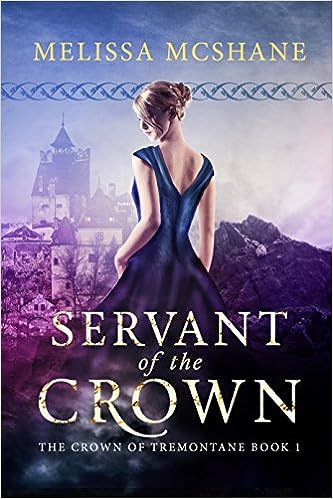 My friend Melissa is giving away a copy of Servant of the Crown on Goodreads from July 6 to July 13, 2015. (Yeah, I like to specify the full date like that in case someone finds this post in the 23rd century, and is bummed out that it happened back in the dark ages.) You can reach the give-away from her web page.

You can also find her Amazon author page here.

I've read several of her books now (including some still in the pipeline), and like both her writing style and her storytelling ability. She also writes fast, so expect lots of cool stuff from her in the future.
Posted by John M Olsen at 9:53 AM No comments: